Tapestry keeps pace in the third quarter thanks to e-commerce and the U.S

Tapestry is going from strength to strength with better-than-expected results between January and March. The U.S. group, owner of Coach, Kate Spade and Stuart Weitzman, posted a 13% increase in sales for the third quarter of its fiscal year 2022, which ended April 2, to 1440 million dollars (1380 million euros). In nine months, turnover reached 5050 million dollars (4860 million euros). 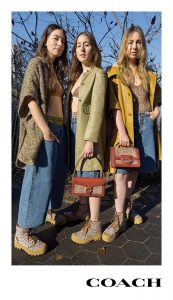 In particular, online sales continue to rise, confirming itself as a strategic channel for the company. Online sales increased by more than 20% compared to the same quarter last year, according to the company’s press release, which maintains its goal of reaching, through e-commerce, «$2 billion during its fiscal year, representing one-third of total sales.»

«Our third quarter results far exceeded expectations thanks to continued strong growth in North America. We won customers with Coach, Kate Spade and Stuart Weitzman, reflecting the dynamism of each of our brands, the power of our platform and the successful execution of our strategic initiatives by our team,» said chief executive officer Joanne Crevoiserat.

Tapestry has made significant investments in the e-commerce channel, particularly through recruitment and new technologies, in order to improve the customer experience and stimulate conversion by encouraging visitors to come to the store to buy its products. The group has also reinforced its investments in technology, increasing its digital and data analytics capabilities.

From a geographic perspective, the New York-based company posted 22% revenue growth in North America, «fully offsetting the decline in mainland China due to confinements linked to the covid resurgence,» it explains, noting that, during the period, it won «more than 1.4 million new customers across all North American sales networks, making progress in both physical stores and the online channel.»

Net income reached 122.7 million dollars in the third quarter of the fiscal year (117 million euros). Operating income amounted to 169 million dollars (160.9 million euros), with an operating margin of 11.8%. Finally, the gross operating margin amounted to $1010 million (€960 million), with a margin of 69.9 %. «As expected, the company’s gross margin was impacted by higher transportation costs to maintain the flow of products to meet consumer demand,» mentioned Tapestry, which estimates the amount of expenses incurred at $63 million (€60.4 million).