«It has not been a positive year, but one even worse than 2020». With these strong statements Eduardo Zamácola, president of Acotex, began this May 19 the presentation of the annual barometer of the Business Association of Textile, Accessories and Leather Trade, which analyzes the evolution of the sector in the year 2021. 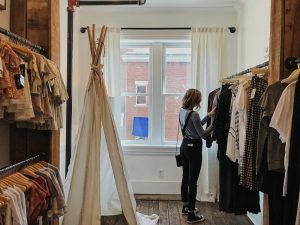 According to figures provided by the employers’ association, in the last financial year fashion sales in Spain fell by 16% compared to 2020 (when the volume of operations was reduced by 41.26% compared to 2019). Thus, the sector’s turnover stood at 8902 million euros. Before the pandemic it had been €18 078 million, a cumulative decline of 54 %.

As for the online channel, Acotex estimates that it accounted for 15.5 % of the sector’s total turnover in 2021. «It reflects the expected decline: in 2020 it went from accounting for 8 % of the total to almost 20 %, so the drop was logical in a year in which sales in physical stores have recovered,» assesses Zamácola.

Tourism on the rise, positive data

«It has been a tremendously tough year for which recovery was expected, but in which sales have fallen even further. For this 2022, the data for the first four months of the year are for growth. However, we must remember that this comparison is established with 2021, so we are still far below the pre-pandemic figures», in Zamácola’s words.

«It seems that we are seeing a recovery in the sector, but we must be very cautious, given the circumstances. The social and macroeconomic news is not the best, with increases in inflation, raw material costs and production, due to the fact that production is moving closer to Spain and the increase in the cost of energy. All this translates into price increases and also has an impact on the profit and loss accounts of companies,» said the president of Acotex.

As a forecast, and without setting a date for recovery, the executive said: «We expect double-digit growth. What we would be happy with would be triple digit, because that would mean doubling sales, but we know that it is impossible».

«Clothing is no longer a priority for the consumer. The sector is in a very precarious situation, additional financing is needed and the repayment of ICO credits is a sword of Damocles,» concluded Zamácola.