Rec.0 festival closes its return to Igualada with more than 100,000 attendees

The Rec.0 festival, a commercial event held in the Rec district of Igualada, closed its last edition, held from May 11 to 14, with record attendance: it received more than 100,000 visitors. 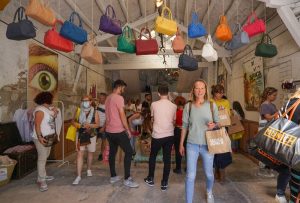 It was the first time this event had been held in two years (in 2020 and 2021 it was not held because of the pandemic) and the organizing company, Rec Stores, «started with uncertainty», as it stated in a press release. However, «the response has far exceeded all expectations,» he said.

In total, a hundred brands (from established to emerging ones) took part in the event, which transformed 54 former tanneries into ephemeral fashion stores. As far as turnover is concerned and in the absence of official figures, the organization advances that the figures of the spring 2019 edition have been equaled «or even surpassed».

In parallel, the festival is committed to maintaining two of the initiatives incorporated this 2022: the sustainable fashion space (which brought together 25 firms with this DNA and had the collaboration of 080 Barcelona Fashion) and its garment exchange market.

Rec.0 was born in 2009 with the aim of raising awareness of the industrial architectural heritage of the Rec district of Igualada. After 12 years of activity (traditionally held in spring and autumn) it has established itself as a key event in the commercial calendar of the region.