Only 10 % of textile waste gets a second life in Spain

More than one million tons of textile waste are generated each year in Spain -about 20-30 kilos per person-, of which only 110,000 tons are collected, which «barely represents 10%», so «the rest is deposited in other fractions until it finally ends up in a landfill». 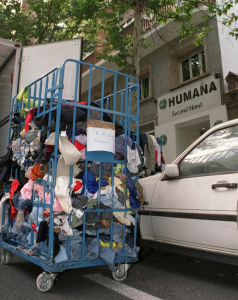 This was stated by the Director of Projects and External Relations of Humana, Rafael Mas, in a statement issued to coincide with World Recycling Day, in which he recalls the «large number» of environmental and social benefits of the recovery and subsequent management of textiles.

Reuse and recycling are «key» to the promotion of the circular economy and the creation of «green jobs», since «there is still no system that can replace the human eye and touch when processing clothes», he pointed out.

They also contribute to the fight against climate change, avoiding the emission of 6.1 kilograms of carbon dioxide (CO2) for every kilogram of clothing recovered, according to a study by the Human Federation People to People.

It is a «decisive and crucial» moment for the fashion sector, which is growing and which European and Spanish legislation has on its agendas, Mas pointed out.

On the one hand, the recent approval in Congress of the Law on Waste and Contaminated Soils which, as far as textiles are concerned, prohibits the destruction of surpluses, determines that selective collection will be compulsory in all municipalities in 2025, strongly supports reuse and promotes the implementation of different figures of Extended Producer Responsibility (EPR).

For its part, Brussels is working on the European circular economy strategy, one of the main elements of the European Green Pact, promoting the waste hierarchy and reuse.

Although it is true that the sale of clothing in second-hand fashion stores has increased by 12% compared to before the pandemic, which shows a growing interest as a result of the need, the trend and the ecological and social awareness of consumers, «there is still a long way to go,» according to Mas.