Niza, a Spanish fashion company with more than 25 years of experience in the sector, buys Dolores Promesas and saves it from extinction. The firm entered into insolvency proceedings at the end of 2020 and had been in liquidation since last December. 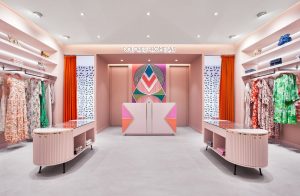 Nice’s plans are to relaunch Dolores Promesas while maintaining its positioning and commercial concept, and the brand’s first complete collection in its new phase is expected to see the light of day in the spring-summer of 2023.

«We do not rule out some capsules in the coming months to revitalize the Dolores Promesas customer,» said José Kalu, CEO of Niza, who also stressed the intention of the new ownership that the brand «can be boosted and benefited by the resources and the corporate and operational structure of the company».

As sales channels, in the first phase of the relaunch, the company will focus on e-commerce and multi-brand, although the network will be completed later with its own points of sale.

«Dolores Promesas has been one of the reference brands in Spain in recent years, with a well-defined identity and storytelling. For the company, this acquisition is an opportunity to complement the offer we currently have and it was very important to give this brand a second chance so that it would not disappear,» said Kalu.

With the same objective of keeping the brand and its legacy alive, Niza has hired Lola Vaquero (who worked as marketing director for 15 years at Dolores Promesas). It has also incorporated as designer Ana Muñoz, who had relieved Alicia Hernández, co-founder of the brand with Javier Lapeña and Miryam Pintado, after her departure from the company three years ago.

Dolores Promesas had 130 multi-brand spaces and a commercial network of 41 points of sale in 2019: 12 corners in El Corte Inglés and 29 stores, including its outlets in Seville and Las Rozas Village (Madrid). In 2018, the last year for which data is available, it had a turnover of 9.5 million euros. That year, the firm had initiated a «rethinking» process that resulted in changes to its corporate image, but also to its product and target audience.

For its part, Niza focuses its offer on women’s fashion, with a commitment to handcrafted designs and limited-edition collections. It currently has 25 stores and 150 multi-brand points of sale and is present in several European marketplaces, such as Zalando, La Redoute or Yoox.