From war to the catwalk: Ecuador’s independence inspires designers

From war to the catwalk, that is the leap taken by the military uniforms of the brave soldiers who 200 years ago sealed the independence of Ecuador, inspiring a group of young Ecuadorian designers for a fashion collection that conveys freedom and emancipation. 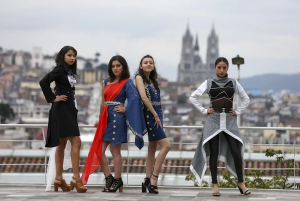 Large buttons, high collars, crossed laces and golden embroidery, among other iconic elements of the military clothing of the early nineteenth century, have been reinterpreted by fashion design students of the Yavirac Institute, in the historic center of Quito, to give birth to contemporary pieces with heroic airs.

It is their particular tribute to the Battle of Pichincha (1822), fought in the Ecuadorian capital on the slopes of the volcano that bears that name and whose bicentennial is commemorated on May 24 as one of the most important days in the history of Ecuador.

And it is on the slopes of Panecillo, Quito’s flagship mountain, where this haute couture version of the independence army commanded by Antonio José de Sucre invades the catwalk of the Yavirac Institute to be exhibited this Thursday in a parade along with other dresses inspired by the country’s emblematic birds.

In this collection there are both male and female designs, in homage also to heroines of Ecuadorian independence such as Manuelita Saenz, Manuela Espejo and Rosa Zarate.

«Some of them were behind the troops. They were known as huarichas and accompanied the liberation armies to support them as nurses or cooks, but also at critical moments they dressed as soldiers to fight,» Ramiro Sarria, a teacher who accompanied the creative work of these costumes, recalls to Efe.

The design inspired by Manuelita Sáenz is a tight-fitting denim dress that combines elements of women’s and military clothing of the time to give rise to a neoclassicist piece, an aesthetic movement in vogue in those years, explains Miriam Rocha, one of the creators of this design, to Efe.

While a false sleeve covers the left arm as clothing of the time, a sort of organza tunic hangs from the shoulder to the right side, held by golden appliqués reminiscent of the epaulettes and shoulder pads worn by soldiers and a belt with golden embroidery of laurel leaves.

In contrast, other creations inspired by the hussars and grenadiers evoke with leather the long high-collared jackets that these regiments treasured, in an elegant and stylized version in black and white with transparencies where the buttons and the laces of the breastplate are preserved.

«I focused a lot on sensuality, allowing women to show themselves as they are without fear of being judged, without the clichés of why they wear little clothing,» Leonardo Raza, one of the authors of these two pieces with which he wants to «empower the wearer and make her the center of attention,» told Efe.

Birds as a symbol of freedom

Along with the historical-themed designs, there are also those allegorical to the flagship birds of the province of Pichincha, whose capital is Quito, with pieces inspired by species such as the Chocó toucan, the land owl, the giant hummingbird, the umbrella bird, the Andean eagle or the ant-eating coconut.

Perhaps one of the most spectacular is the design based on the giant hummingbird, a green piece with side slits up to the waist that allows the back to show off so that the eyes end up resting on its multiple tail, which reaches the ground in an allegory of the most distinctive part of this bird.

In the case of the dress alluding to the toucan of Chocó, it takes its yellow and black colors, with the shape of the beak in the front neckline and its tail in the back, Camila Villagómez, creator of this proposal along with two of her colleagues, told Efe.

«For the wings we used an opening in the entire skirt, so that when walking it gives the sensation that it is flying, and to simulate the eyes we made an overture of green rhinestones, while feathers were put all around the bodice and skirt,» says Villagómez.

For Professor Sarria, the element that unites the historical designs with those of birds is «freedom», because «a bird is a symbol of freedom, and many of these species are in danger of extinction, if we don’t take care of them, we will lose them forever».