The footwear firm Bryan Stepwise, with the made in Spain by flag and a youthful spirit, was born in 2015, but it was not until 2020 when it opened to the online channel, where it expects to record a growth of 40% this 2022 to reach 6 million euros in total sales. 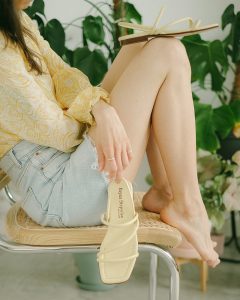 Sánchez, as is the custom in Elche, comes from a family with long ties to the footwear sector and it was always clear to him that he wanted to dedicate himself to this sector. At a time when the multi-brand «was becoming obsolete» and there was «a cannibalization by other markets», he opted for this channel (the one he knew from his family’s experience) to launch his own brand.

«It was the structure in which we operated and the brand worked well in wholesale. Later, when we were already a firm known by the general public, we decided to bet on the digital environment, growing organically,» says Sanchez.

Bryan Stepwise entered the digital environment by launching its e-commerce only in Spain, but since April 2021 it has been available in other markets such as Italy, France, Portugal, Belgium and Germany. Overseas sales accounted for 20% of the channel in 2021, while the forecast is for them to reach 30% by 2022.

Its multi-brand network, where the firm took its first steps, currently consists of 300 points of sale in Spain, 120 in Portugal, 60 in various European markets and another 60 in Japan.

«Despite the current situation, distribution is going through a good period: in 2021 we grew 23% in wholesale compared to 2020, and this year we expect to increase sales through this channel by 30%,» says the CEO.

Bryan Stepwise’s roadmap also includes retail: in November 2021 it opened its first store on Almirante Street in Madrid. In flagship store format, it works as a showcase for the brand, which, although for the moment has not closed a plan of openings, does not rule out raising the shutter of new establishments in the medium term.

With headquarters in Elche and a staff of 40 people, the company manufactures all its designs in its own facilities. «We are artisans, everything is made in-house and, for certain production tasks, we rely on local collaborators. Made in Spain is our way of life,» sums up Sánchez.