Spanish designer Ágatha Ruiz de la Prada returns to Uruguay for a particular fashion show and recognizes that, although as a creator her «great obsession» has always been scenarios such as Paris, Milan or New York, Latin America is «paradise». 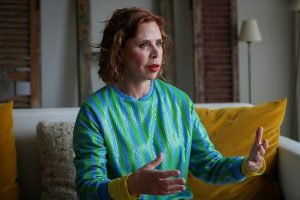 Motivated by a new fashion show in Uruguayan lands, although in a scenario closely linked to the Spanish, the renovated Real de San Carlos bullring, next to the heritage city of Colonia del Sacramento (southwest), Ruiz de la Prada wonders in an interview with Efe: «What am I doing fooling around with how people live here?

With more than four decades dedicated to the world of fashion and countless visits to Latin America, a land of «nice people», Ruiz de la Prada understands that sharing the language is a «joy» to feel «infinitely more comfortable, happier» than in other parts of the world where he also made inroads with his creations.

A river or a sea

She is not sure if this is her «seventh or eighth» visit to Uruguay, a country she loves to return to whenever she can since she «flipped out» with Punta del Este (southeast), the epicenter of social life in the southern summer.

The architecture of Punta del Este left her «captivated» and since then she always returns to this country where her friends are the «key» to generate projects, such as the costumes she made for «Sleeping Beauty», of the National Ballet, in 2018 or the parade that she will share this Saturday with the Argentine designer Patricia Profumo.

The Cologne event will seek, according to its organizers, to «agathize» the historic bullring, erected in 1910 and reopened last December after an arduous restoration work.

Ruiz de la Prada says she is fascinated that Uruguay has something she had never seen before: «Wild beaches in the middle of the city», besides «this thing (…) that I don’t know if it is a river or a sea», in clear allusion to the estuary of the Río de la Plata.

The joy of dressing

True to her unmistakable style, she herself is the best ambassador of her brand and her designs full of flowers, hearts, vibrant colors and geometric figures have infected people all over the world: Uzbekistan, Singapore, Colombia and Albania are just some of the countries that illustrate the journey of her creations during the interview.

Dressed in a green and blue striped sequin sweater, purple tights with glitter and red and white polka dot shoes, Ruiz de la Prada says she is the «most intergenerational designer on the planet», since, as she says, «there are many girls and boys who on the first day of their lives are already dressed by Ágatha Ruiz de la Prada».

She explains how she is committed to «democratizing fashion» and that her designs, which are shown on the best catwalks, can also be bought «at a bargain» price.

«Before, only very rich people could be well dressed and now the vast majority of people can be well dressed for little money,» she continues and, «against all odds I have turned out to be a designer for everyone,» says the woman who, as a child, wanted to be a painter.

«I think you may like my clothes or not, but the good thing about my clothes is that everyone recognizes them,» she says.

The creator says she has had «the joy» of dressing many people and confesses: «It is difficult to give me a gift (…), I don’t wear jewelry, I make everything: shoes, clothes, perfumes. The greatest gift you can give me is to be dressed as Agatha».

Elegant wedding dresses or artificial grass in vibrant shades, as well as home textiles and hair accessories are some of the products that the designer markets with her unmistakable stamp.

Ruiz de la Prada recognizes that the pandemic made her «get up to speed» because of the «unexpected, implausible and inexplicable» situation.

Although he says that sales suffered and that it will take years for the fashion industry to assimilate the changes brought about by «people spending a year and a half in tracksuits», Ruiz de la Prada acknowledges that he is thinking about what new products he can offer.

He also maintains that «a very nice thing» that happened during the pandemic was that «everyone wanted to be more ecological» and that, when «people started to tidy up», they saw that «they need fewer things».

The «Fashion trends» fashion show is the reason for his second trip to America since the restrictions caused by the pandemic began to be lifted, after visiting Mexico in March.

«For me (this trip) is getting back to normal life and that’s what I’m celebrating,» she says before continuing preparations for this Saturday’s event.