BNPL (buy now pay later) specialist Clearpay has released a new trend report and said that 90s looks, as well as styles from the 60s and 70s, are proving key among consumers using its services. 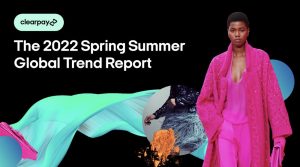 The biannual report shows that Brits are still very interested in Y2K styles, while «barely-there» clothing is also making an impact, driven by influencers such as Rihanna.

Looking at the trends, Clearpay says, «The trend for dressing in a sexy silhouette that emerged at the beginning of the pandemic is evolving into barely-there clothing.

This means that lingerie styles are «creeping into everyday wear» and Clearpay’s data shows that bodycon dresses «reign as the most popular dress style.» This also carries over into categories that traditionally show rather than conceal, with even more fashion-forward revealing looks, such as lace swimsuits and «plunge» garments, being among the most popular styles.

It is also interesting that while the style of the near-2000s are the main trend drivers, there is also a more retro trend of the 1960s and 1970s, particularly in terms of prints and patterns, as festival season returns.

According to Clearpay, six months ago, sales of floral prints have increased 23%, with daisies predominating in the form of crocheted tops, abstract print dresses and matching ensembles.

Other ’60s and ’70s styles are evident in the rise of clogs and «wide-leg» jeans, and an almost glam-rock ’70s vibe, led by celebrities such as Harry Styles.

In terms of accessories, the Fendi Baguette, the trendy bag of the 1990s, is among Clearpay’s top 10 accessories and is being embraced by the Z generation. It is often paired with low-slung jeans and crop tops, with Carrie Bradshaw from «Sex and the City» as a style reference.

The company also noted that consumers are choosing accessories such as handbags with big, bold details and grunge-style chain necklaces in a «pop-punk renaissance.»

The season is also seeing a resurgence in ceremonial wear as, after two years of postponed or canceled events, consumers are ready to attend weddings, parties and special events. This has pushed midi dresses up 178%, while heeled styles are quickly replacing the star shoe of 2020: the sneaker.

Meanwhile, runway trends that are clearly transferring to the mass market include «old Hollywood» pink, driven by Valentino; fringe, which taps into the overall retro style vibe; sexy cuts, which were all over the runways; and miniskirts, inspired by looks from the 60s and 90s.

The big names in luxury continue to bet on physical stores

From Jennifer Lopez to Britney Spears, the best Grammy beauty looks of all time